Have You Become A Prostitute? 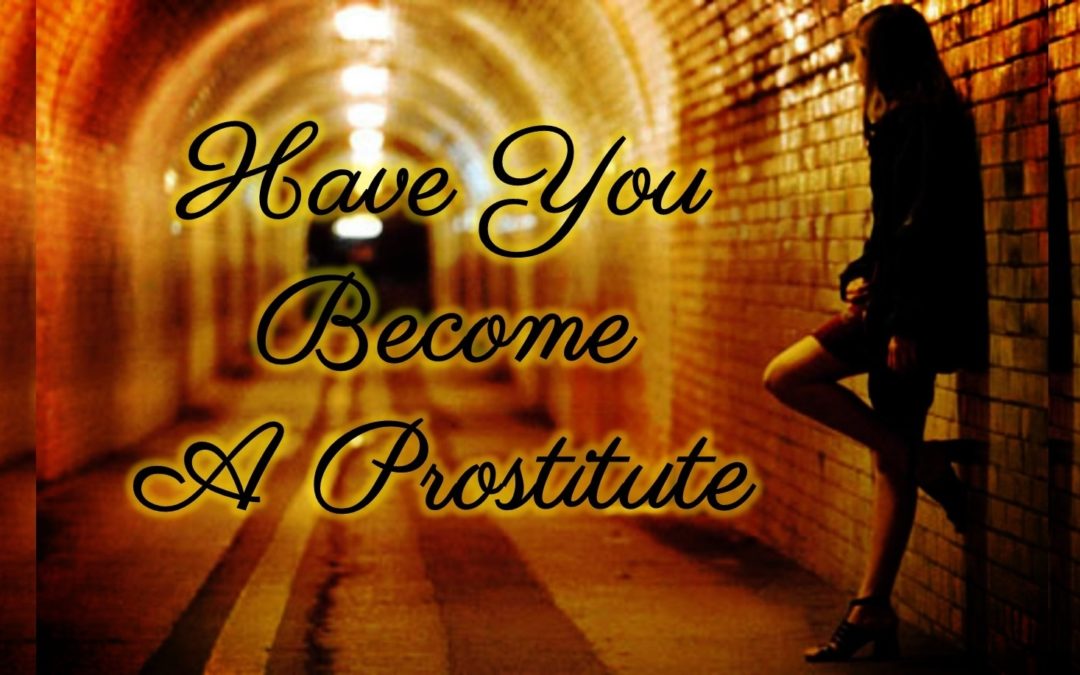 If there is one thing that every single one of us has in common is the innate desire for love and affection.

It’s no secret how easy it can be to fall into unlikely and unhealthy encounters with someone just to enjoy the feeling of being desired, accepted, embraced… loved? Likely not, but we use the word so loosely these days that it is often the illusion under which we operate, even referring to the act as “love making”.

The pursuit is often based on achieving a sense of self worth, affirmation, acceptance, belonging or even the fairytale thought of being rescued by a night in shining armour that prompts us to venture out, seeking that someone who will fulfill the desire, pour love and affection into that void and make us feel whole. The proverbial other half, the piece of the puzzle. Someone to make us feel complete…

The word prostitute tends to stir up images of dark alleyways and illicit encounters. An exchange of money for sexual favours. Certainly not something we could relate to. Surely not!

What if the means of exchange varied perhaps? The currency being affection rather than money? Or money in exchange for time and attention. Perhaps a favor in exchange for a promotion…

What were the Israelites exchanging when God so vividly portrayed them as a prostitute on multiple occasions? Consider these words:

“… But you have lived as a prostitute with many lovers— would you now return to me?” declares the Lord.

…“Have you seen what faithless Israel has done? She has gone up on every high hill and under every spreading tree and has committed adultery there.

The Israelites were “prostituting” themselves by worshipping idols.

The definition for the word “Prostitute” is pretty consistent across the various online dictionaries: a person who engages in sexual activity for payment.

Now why would God refer to worship using a term that we would perceive from a sexual context? Because worship is intimacy with God. It may sound strange because we have a very perverted sense of what sex implies.

We have taken something that was meant to be scared and pure and created such a distorted image of what God intended it to be. Intimacy is defined as a close familiarity or friendship, subtexted as “the intimacy between a husband and wife”.

Words used to define sex include “intercourse” and “making love” with the more detailed scientific definition including a description using the specific organs and manner of use for the purpose of reproduction or pleasure. Still all pretty palatable.

Yet sex had become perverted even since biblical times with acts including rape, defilement and prostitution being commonplace. Why? Because what God has formed, the enemy seeks to deform.

Pervert: to distort or corrupt the original course, meaning, or state of something.

Now let’s look at worship. Defined as the feeling or expression of reverence and adoration. To ascribe worth. Bowing down to lift up. Extravagant respect or admiration for or devotion.

We were created to worship God, instead, satan convinced Eve that she would much rather be like God, so she ate the fruit and ever since, man has been inclined to ascribe greater worth to things outside of what God had intended for us.

In the book of Hosea the story is told of how Hosea was to marry Gomer, a promiscuous woman, to mirror and illustrate the ongoing unfaithfulness of the Isrealites. Yet God remains faithful.

“Return, faithless people,” declares the Lord, “for I am your husband. I will choose you—one from a town and two from a clan—and bring you to Zion.

Paul in speaking to the Corinthians says this:

I am jealous for you with a godly jealousy. I promised you to one husband, to Christ, so that I might present you as a pure virgin to him.

If you are engaged to be married would you share intimacy with others? Would you honour your fiancé? Would they be your priority? Now ask yourself where you are in your relationship with the one who died because of the depth of His love for you… The God who has gone to prepare a place for you. Are you worshipping Him or prostituting yourself to the world and it’s many deceptions?

A cry is heard on the barren heights, the weeping and pleading of the people of Israel, because they have perverted their ways and have forgotten the Lord their God.

We were created for intimacy with God. For sacred encounters. Passionate embraces. Words of affection. From a perspective of sanctity and purity. In Matthew 6:6 the manner in which to pray is described as such:

The Greek word Tamieon literally describes a bedchamber. A little space within a room that is secluded and private, a place of intimacy.

That night in shining armour we all dream of is there, waiting for us to realise that He saved us over two thousand years ago. We wait for someone to complete us, yet He made us every bit whole when He declared “It is finished” on the cross.

What I love most about Jesus is that He calls us exactly as we are, no matter how we have desecrated and damaged ourselves. He gives us a garment to cover it all. It is called Righteousness and it is completely clean, what we choose to do next, is up to us, but as long as we keep Jesus close and follow the care instructions, we have a garment that will even cleanse and heal the layers beneath.

See, you do get magic cloaks after all, except that it’s not really magic, it’s Spiritual… just as we were created!

God is spirit, and his worshipers must worship in the Spirit and in truth.